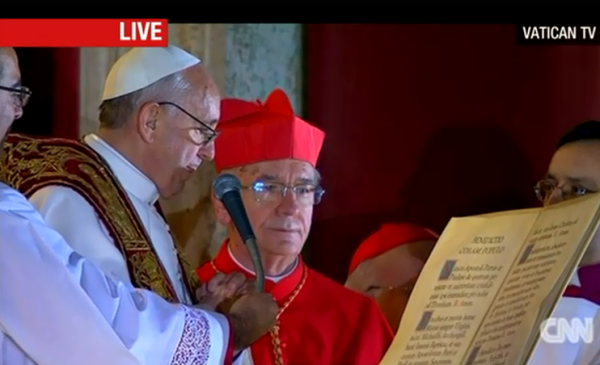 Before a crowd of nearly 100,000 people and a television viewing audience across the world, Catholics were introduced to Argentine Cardinal Jorge Mario Bergoglio- a historic landmark on the stage of world religion.

Bergoglio, 76, is a Jesuit from Buenos Aires and is the first pope in history from South America. He is also the first pope to take the name of Francis- indicating his desire for humility and service to mankind.

Senior Bishop Emery Lindsay, urges the entire fellowship of Church of Christ (Holiness) USA to pray for Pope Francis as he leads the world’s largest religion.

“Our prayers are with the new Pope of the Roman Catholic Church as he assumes the leadership of more than one billion Catholics in the world. It is our prayer that God would grant much grace for this new chapter in the Catholic Church. As they have selected a leader from the Americas, it gives a great testimony to the diversity [within] the body of Christ and the world-wide message of the hope we share in Christ.

Bergoglio is known to be conservative on spiritual issues. According to CNN, he opposes abortion, same-sex marriage and supports celibacy, a common practice among Catholic priests.

Last year, Bergoglio challenged a body of Argentina’s priests to continue the ways and practices of Jesus Christ.

However, Bergoglio has not been without controversy within the Catholic Church. He recently criticized Catholic priests who refused to baptize infants born out of wedlock.

“In our ecclesiastical region there are priests who don’t baptize the children of single mothers because they weren’t conceived in the sanctity of marriage,” Bergoglio told his priests during an assembly.

“These are today’s hypocrites. Those who clericalize the Church. Those who separate the people of God from salvation. And this poor girl who, rather than returning the child to sender, had the courage to carry it into the world, must wander from parish to parish so that it’s baptized!”

Bergoglio compared this concept of Catholicism as “this Church of `come inside so we make decisions and announcements between ourselves and those who don’t come in, don’t belong,” to the Pharisees of Christ’s time — people who congratulate themselves while condemning all others.”